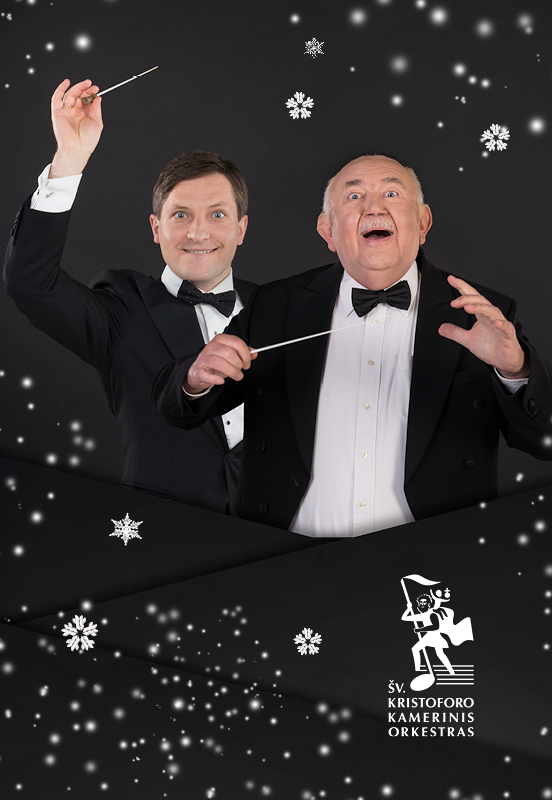 While waiting for the upcoming New year 2018, St. Christopher Chamber Orchestra invites you to celebrate joyfully and with music! The founder, art director and conductor of the orchestra Donatas Katkus has finally found a worthwhile inheritor, thus he will not be lonely at the conducting stand. On such occasion of a new beginning maestro will hand his magic wand to a young and great, acclaimed as the best young artist of the year 2016, Modestas Barkauskas.
The evening will be adorned by two exquisite singers of the new generation – charming, acclaimed as the most promising singer in 2016, velvet voice owner – Aistė Pilibavičiūtė and charismatic winner and scholar of a prestigious festival, who possess an exceptional voice – Edgaras Davidovičius.
In a festive program – the best arias of all times and the most beautiful Christmas songs, curious stories and fresh jokes. Surprises are foreseen!

Saulius Petreikis and St. Christopher Orchestra “While Waiting for Christmas” 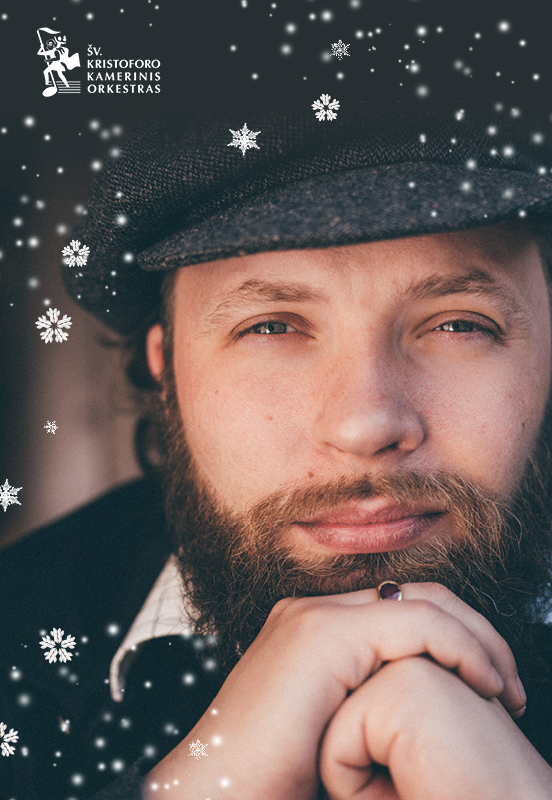 Saulius Petreikis – the most famous Lithuanian multi-instrumentalist, professional musician, wind instruments virtuoso and a wonderful creator mixing popular and classical music, folklore and jazz elements. Instrumental music by Saulius Petreikis – it is a state of mind when time and space disappear, compositions – are deep stories, music notes – heroes of the fairy-tales.
Saulius Petreikis and St. Christopher Chamber Orchestra with a program – “While Waiting for Christmas” – is a feeling of joy, when we think about certainty, send brightest wishes and give gifts. This program – is a meeting and it is so nice in here, because we are all surrounded by our close ones; cosy, because the harmony is in the air; magical, because concentration and hearing leads to a journey around the world.
Fiery musicians and melodies that fly on the wind in St. Catherine’s Church on 21 December.

BENJAMIN BRITTEN – Variations on a Theme of Frank Bridge, Op. 10 for string orchestra

The Vilnius Municipality St. Christopher Chamber Orchestra stands out for its stylistic versatility. Formed as a baroque orchestra it soon earned a reputation of the reviver of rare scores and also became an excellent performing force for many a Lithuanian composer. This programme revisits several epochs as if tracing the creative path of the tandem of the orchestra and its founder and artistic director Donatas Katkus. With Joseph Haydn being one the conductor’s favourite composers, the Maestro confessed that he “would again greatly enjoy conducting his music”. Couple of the works on the programme are substantially linked: Suite for strings by the composer and violist Frank Bridge and Variations on a Theme of Frank Bridge by his disciple Benjamin Britten, the foremost 20th century British composer. Britten’s opus in which he employed the theme from Bridge’s Three Idylls for string quartet (1906) is dedicated to his teacher. Akin to his teacher’s music Britten’s Variations are imbued with the sense of anxiety and absorption, but also sunlit lyricism. Later on the opus drew attention of many a choreographer and was employed in dance productions. However, these works are seldom performed in Lithuania and, according to Katkus, “in anticipation of a New Year it would be rather courteous to bow to scarcely ever heard British music”. Lithuanian contemporary music will be represented by Tuba plumbum, Gintaras Sodeika’s impressive opus premiered in 2013 in Velnio duobė (Devil’s pit) in Aukštadvaris, Trakai reg. as part of an international project “New Music: New Audiences”. Then the solo part was performed by Rimantas Ramanauskas (bass clarinet). The renowned saxophonist Liudas Mockūnas will be the soloist this time. According to the conductor, the performer is in perfect tune with the opus. 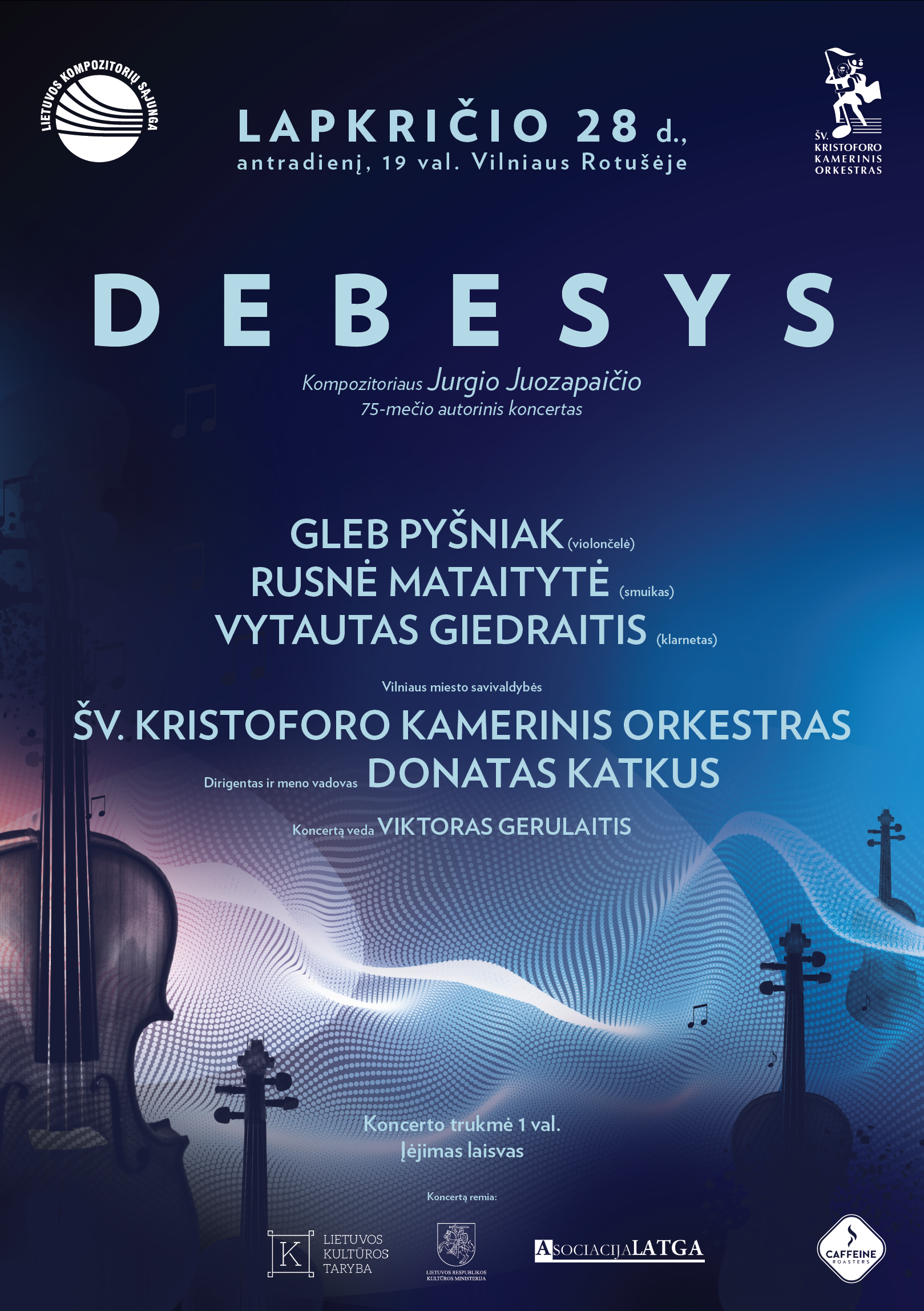 A concert for the 75-th birthday of composer Jurgis Juozapaitis

Supported by: Lithuanian Council for Culture, Ministry of Culture of the Republic of Lithuania, LATGA 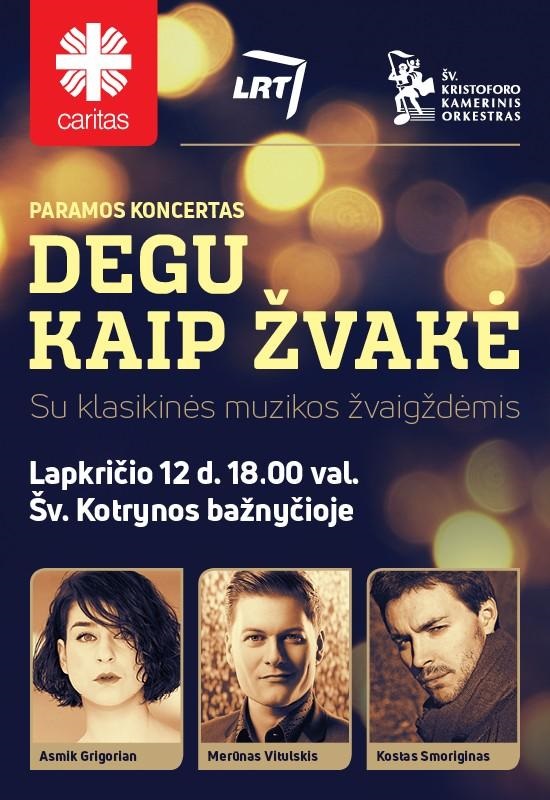 Children are our foundation of life. Often we call them the Future of Lithuania. Unfortunately, part of our children don’t have opportunities to enjoy a careless childhood. We all want to give children what is best for them, thus this year The Archdiocese of Vilnius, LRT and Vilnius Municipal ST. CHRISTOPHER CHAMBER ORCHESTRA together with stars of classical music for the forth time in a row invite you all to light up the hope for the most vulnerable members of society. These are children who attend the “Caritas” day centers of Archdiocese of Vilnius, that are almost the only informal space for activities, learning and cognition of the world around us.
Every one – contributed to this support concert – by taking part in or by offering during the online LRT broadcast – will help to build up a hope of a better world.

All finances gathered during the concert will be contributed for the children activities of “Caritas” day centers of Archdiocese of Vilnius. 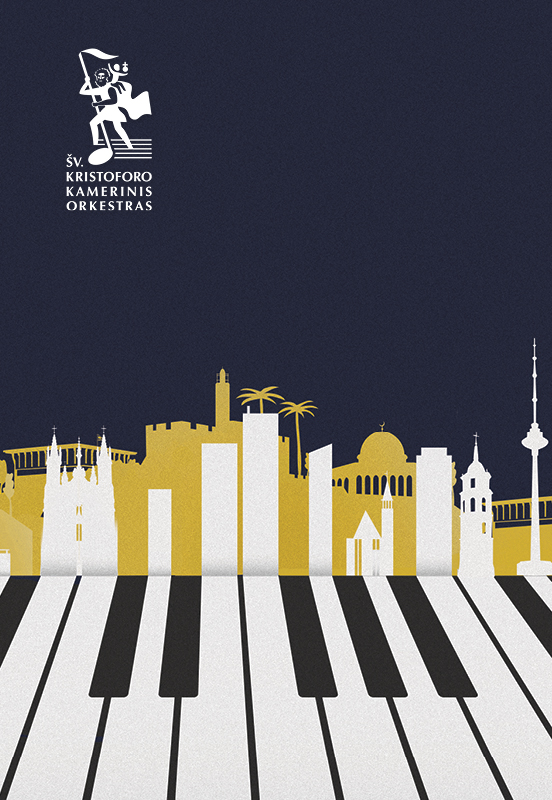 JAZZ FROM ISRAEL – is a charming concert for everyone who miss sunlight and exotica, also to all jazz music lovers. During the concert you will hear subtle performance of selected pieces by the author performed by St. Christopher Chamber Orchestra. An eccentric trio that was very famous in 1971–1987, known as Ganelin trio, that intrigued with it’s versatility and non traditional jazz interpretations, will reborn in a new consist! You will hear improvisations by three jazz-men: Viacheslav Ganelin (keyboard), Petras Vyšniauskas (saxophone), Arkadij Gotesman (percussion). 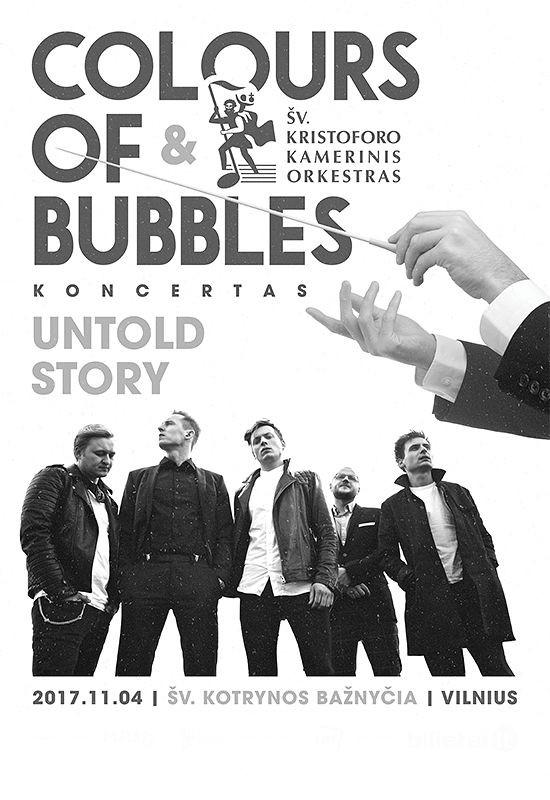 This Autumn one of the best Lithuanian rock bands Colours of Bubbles has united its power with St. Christopher Chamber Orchestra and on the 4th and the 5th of November will present a project “Untold Story”.

„Untold Story“ – is a not yet told “Colours of Bubbles” musical story, where rumbling and sometimes tender sound of electric guitars will blend together with magnificent power of St. Christopher Chamber Orchestra. Only during this project the songs of the band will sound freshly with all their power. 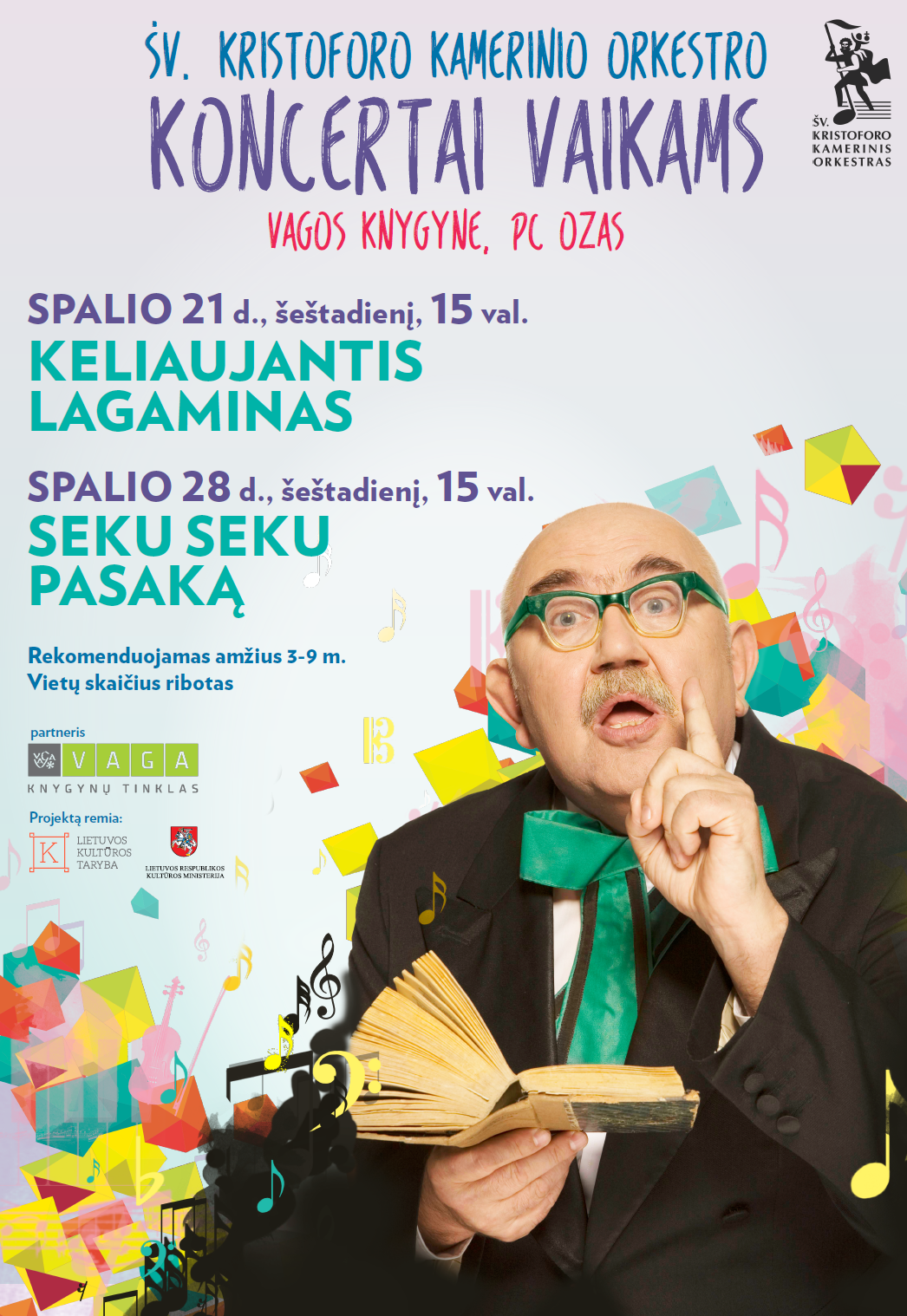 Number of attendees is limited